How do you approach the reading of a script ? The first time I read a script, I try to read it through in one sitting, purely as a reader enjoying a story. I may jot down a few initial thoughts about the settings or themes, but I generally like to keep an open mind regarding the material until I have a chance to sit down with the director. We’ll talk about elements of the script that are provocative or exciting, and overall ideas about what makes the material special.

I approach the script as a roadmap for the film, but I generally consider the descriptions of settings as suggestions and I try to ask myself how the settings could be manipulated to magnify the emotional context of each of the scenes and the narrative as a whole.

I also love art galleries, and one of the first things I do when shooting in a new location is seeking out the local galleries.

Your filmography mainly consists of genre films (SF, fantasy ...), and large budget visual effects films ? How do you explain that ? I’ve always been a big fan of Sci-Fi and Fantasy films, and I suppose that’s a product of the times in which I grew up. I was born in 1974, and I think I was at my most sensitive, creatively, during the 1980s.

Some of my fondest movie-going experiences were the films that launched the idea of the franchise movie—Star wars, Riders of the lost ark, Back to the future, The terminator...

These types of high-concept films were greatly appealing to me as I started my career as an Concept Illustrator and Art Director, but they also benefited from larger sized art departments, so by nature they hired more artists than smaller, dramatic films. As a result, opportunity bred experience and then experience bred more opportunity.

In your opinion, what is the best training to become a designer ? The best experience is the opportunity to work for, and learn from great Production Designers. I learned so much from my experiences as a member of Bo Welch’s art department (Men in black trilogy) and later Alex McDowell (Minority report, Charlie & the chocolate factory, Watchmen).

There’s a practical side of the job that you can only learn by physically doing it, and then there’s a more theoretical side of the job that comes later, and I think that comes from experiences with directors, where the focus is on telling better stories, and building out the story world to make more satisfying moviegoing experiences. I’m always learning and training to be better, so I’m always looking for opportunities to learn from great storytellers.

They look to me as a problem-solver, as an idea person and also as someone who can help build enthusiasm for ideas using visuals. In the best instances, we are partners in building out a world for the narrative to take place.

Can the designer affect the choices made in the mise-en-scene or lighting ? Of course, and I think creating a strong color palette and mise-en-scene is part of the responsibility of the Production Designer, in collaboration with the Director and Director of Photography.

There are some deep-rooted differences between Franco-cinema and Anglo-cinema that go back to the early histories of the film industries of both countries. The film industry that I work in went down a different path starting in the 1930s where the "Art Director" evolved to a position we call "Production Designer."

This was invented to describe the person responsible for the look of the film, and also for creating the world in which the narrative will take place. In contrast, the French film industry uses the term "Chef Décorateur" which is a term I find pejorative in that being in charge of the decorative elements of a film is really a small part of the job.

My experience is that the French, for the most part, consider films as a product created by an auteur, which is why we often see movies advertised as "a film by...", whereas in the U.S. the director is generally regarded as the creative head of a team of other creatives, similar to the structure of a Broadway play with more equal billing and recognition of responsibly.

I think it’s only a matter of time until the French film industry evolves their terminology for the description of our job to reflect the connection we have with the building of the story world, and as an extension, the connection we have to the mise-en-scene, especially since the production of films today are far more sophisticated and require the close collaboration of many creative experts, not just the director dictating his own particular vision.

Since you started, what was the evolution of decoration in American cinema ? The biggest change that I have seen in the last 20 years is that we don’t really make films in Hollywood anymore. The studios are going farther and farther afield in attempts to secure lucrative tax rebates and credits.

It’s a huge shame actually because the studios in Los Angeles had evolved over a century to be incredibly efficient places to make motion pictures, with hundreds of support companies located within the perimeter of the studios. Nowadays, we find ourselves trying to reinvent the wheel with each film in each remote location, trying to create sophisticate sets, but often having to custom-build infrastructure for each production, and also being forced to fly in crew members from all over the world.

The second big change is that the job of Production Designer has evolved to be the person who drives the creation of all the visuals, whether they are physically built or created digitally in post-production. There are more sophisticated tools and technologies available now to artists in the art department, so have the same resources to create assets that will be used in the final shots by the visual effects companies.

The funny thing is that this was the way things were done in the "olden days" with Production Designers overseeing matte paintings and such, so we are evolving backwards in a way.

Have you had the opportunity to work in France or Europe ? If yes : What have you learned from this experience ? I’ve worked on two films in the UK, most recently Dracula unborn for Universal Pictures, and also Charlie and the chocolate factory, which I worked on as an Art Director. Working in different systems is very interesting because it highlights the differences between the various systems. As a result, I like to set up hybrid workflows if possible. For example, I like to use an "On Set Art Director" which is a UK invention, but ensures that I have someone on set who can be my "eyes and ears."

An event, a meeting, a movie ... did you decide to make a film set ? It’s funny because I never knew such a job existed until I was in High School. I always wanted to be an artist—an illustrator perhaps. But I really loved movies. When I learned that there was this magical job where you could draw AND make movies...well that just seemed like the dream job to have !

As a viewer, which films or filmmakers you admire ? I really like to see all kinds of films by all sorts of filmmakers. There are so many I admire, from films by the greats like Scorsese, Spielberg, Kubrick, Coppola, Polanski ; to the current generation of greats like Tarantino, Nolan, the Coens, Cuaron... Also newish directors like Sarah Polley, Tom Tykwar and Nikolaj Arcel. In the end, I want a movie to not only make me feel something, but also do it in an elegant way. When that happens, I’m in awe.

A souvenir particularly strong since your debut in the cinema ? I’ll never forget the first time I drove onto a film studio. It was the Warner Bros lot in Burbank and I arrived to my first interview for a job in my 1972 VW Beatle. It was like walking back in time as the lot has been so well preserved, and I was just in awe of the place.

The feeling still stays with me today, every time I walk that grid of sound-stages and through the New York back lot, it just feels like a magical place, echoing with the spirits of so many filmmakers who made magic there. 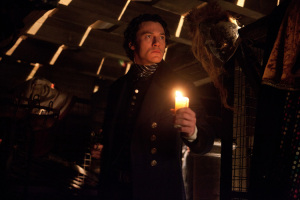